Here are a few NHL betting lines to consider, with odds courtesy of Bovada.

Scoring was a glaring issue in Game 1 for the Montreal Canadiens, who will attempt to even their first-round series against the New York Rangers Friday night at the Belle Centre.

It wasn’t the start the Habs were hoping for as their backs are now against the wall heading into Game 2. The Rangers enter action on Thursday night at -160 favorites on the road. However the Canadiens will be hungry to tie this series and avoid heading to Madison Square Garden down two games in the best-of-seven series. The Habs are +140 underdogs heading into a critical home game on Thursday night.

As proven in Game 1, this series will continue to be a goaltending duel between Montreal’s Carey Price and New York’s Henrik Lundqvist, who were both spectacular in the series opener.

Expect much of the same in Game 2.

After producing just two tallies in the opening game, take the under on the total goals projection of five. This time, the Habs will come out on top.

If Game 1 was any indication, the best-of-seven series between these two Metropolitan Division rivals will go the distance.

The Penguins drew first blood, however the Jackets will look to even the series on Friday when the clubs clash for Game 2 in Pittsburgh. The defending Cup champions enter action on Friday as -170 favorites on home ice. The Jackets are hoping to square the series as +140 underdogs.

Columbus cannot afford to go back to their rink down 2-0 in the best-of-seven series, which makes Friday night’s match all that more important. 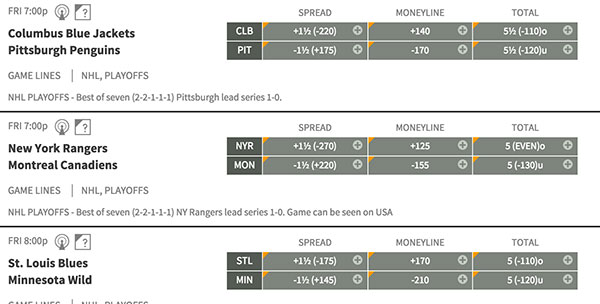 While Sidney Crosby and Evgeni Malkin are Pittsburgh’s go-to players, keep an eye on Phil Kessel in this series. The sniper has gotten off to a hot start and will continue to add scoring throughout the series.

The total goals projection for this matchup is set at 5.5 but don’t expect a high-scoring affair in Game 2.

Jake Allen was the story in Game 1 as the netminder helped St. Louis steal a crucial road victory in Minnesota in Game 1 of their Western Conference quarter-final. The Blues will look to take a stranglehold on the series on Friday night when they play in Minnesota for Game 2.

The Wild, who finished second in the Central Division, are -210 favorites heading into the critical matchup at Xcel Energy Center, where Minnesota dropped just 12 games all season.

The total goals projections for Game 2 is 5, but much like the opener, expect a tighter-checking matchup — this time with the Wild coming out of top.

The Oilers are down but definitely not out — especially with No. 97 in the lineup.

Connor McDavid and the Oilers will try to even their first-round series against the San Jose Sharks on Friday as the Pacific Division rivals prepare to face off in Game 2.

After winning the Art Ross Trophy as the NHL’s scoring leader, McDavid did not feel the jitters in his playoff debut. The Oilers’ captain has an assist heading into a crucial Game 2 matchup as Edmonton are down 1-0 in he best-of-seven series.

The Sharks, who reached the Cup final a year ago, are outshooting the Oilers by an average of 33 to 24.33 in the last three meetings.

Although the Oilers were able to jump out to the early lead in the opening game, experience prevailed for the Sharks.

Considering a wager on total goals? The projection for Friday night’s contest is set at 5 — a mark both clubs will meet with ease.