The Eastern Conference Final is set as the defending Stanley Cup champion Pittsburgh Penguins take on the Ottawa Senators in what is sure to be an epic best-of-seven series.

Take the Pens to advance to their second straight Stanley Cup 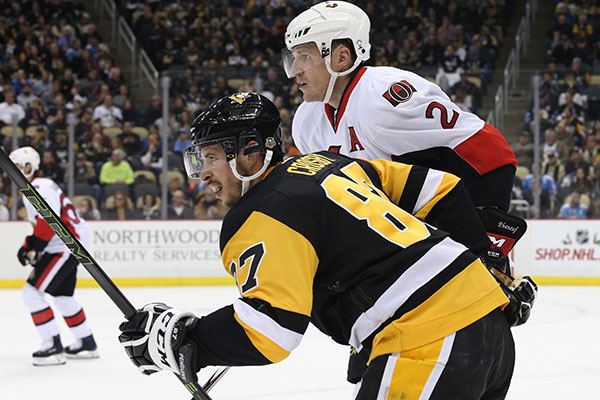 The Ottawa Senators are back in the NHL’s Final Four but to get to the title round, the lone Canadian team must first get through the defending Stanley Cup champions.

The Eastern Conference Final gets underway on Saturday with the longshot Senators facing the Pittsburgh Penguins, who enter the best-of-seven series as -280 favorites. The Senators are proving they’re a club to be reckoned with as well, eliminating the Bruins and Rangers in the first two rounds. Ottawa enters the massive series as +240 underdogs to take down the defending champs.

Jake Guentzel has been a pleasant surprise for the Penguins as the rookie forward has netted a pair of game-winning goals in the playoffs. Can Guentzel score more than five points in this series? That’s the total points projecting Bovada has set for the young Penguin scorer.

A concussion scare hasn’t seemed to slow down Sidney Crosby, who is riding a three-game point streak into the Eastern Conference Final. Crosby still has 14 points in 11 playoff games — including seven in their series against the Washington Capitals. That’s the projected mark Bovada has set for Crosby, who is seeking his third Stanley Cup ring.

The Senators have been defensively sound under Guy Boucher’s system, however they can expect a stiffer challenge against the Penguins, who are averaging an astounding 3.42 goals for per game. Marc-Andre Fleury has had an up and down post-season but is a major factor why the Penguins find themselves in this position. The Flower has record eight victories in the playoffs, tying him among the top goaltenders in the NHL.

Of course the Penguins have to be wary of Ottawa’s top weapon: Erik Karlsson. The swift-skating Swede has 13 points in the playoffs, so be sure to take the over on Bovada’s projected point total of 5 in the Eastern Conference Final.

Breaking down the head-to-head history between these two clubs, the Penguins hold the advantage, winning six games over the last 10 meetings. The Sens won’t be pushed around, but the Penguins have too much fire power to contain. Take the Penguins in seven games.