The divisional round of the NFL playoffs is officially upon us. Four games are on tap this weekend, with eight teams vying for the right to reach their respective conference championship. We offer our picks for each contest using RealBet’s game lines.

Give yourself an advantage over the sportsbooks this weekend by checking out our picks for each NFL divisional playoff game. All lines come from RealBet and should be double-checked prior to placing any wagers.

That the Atlanta Falcons are 4.5-point favorites is a testament to their offense. They ranked first in the NFL in points per game during the regular season, and quarterback Matt Ryan spent a majority of the year being mentioned in the MVP discussion.

Any other week, though, the Falcons wouldn't be promised anything against the Seattle Seahawks' third-place defense. Nothing changes here.

More harrowing than that for the Falcons is the Seahawks' offense. Though Seattle ranks 18th in points scored per game, it hung 26 points on a typically stingy Detroit Lions defense last week. Atlanta's points-prevention prowess is substantially worse; the defense hovered around the bottom five in points allowed per contest.

All signs point to the Seahawks not only covering, but winning.

This is a genuinely tough line.

On one side, you have the New England Patriots, the best team in the NFL, bar none. They enter having exited the regular season with a top-three offense and a first-ranked defense.

On the other side, you have the Houston Texans. They ranked 11th in points allowed per game during the regular season, and their offense showed signs of life last week against the Oakland Raiders, tallying 27 points.

Oakland's defense is not New England's defense, though. And the Raiders' Derek Carr-less offense isn't the Patriots' Tom Brady-piloted offense, either.

The Patriots are a different animal altogether—one the Texans have no shot at beating. New England is at home, where it's been dominant all year, and head coach Bill Belichick won't pull any punches from the offensive playbook on a postseason. It also doesn't help Houston's case that it's not used to playing in the cold weather that'll await in Foxsborough. 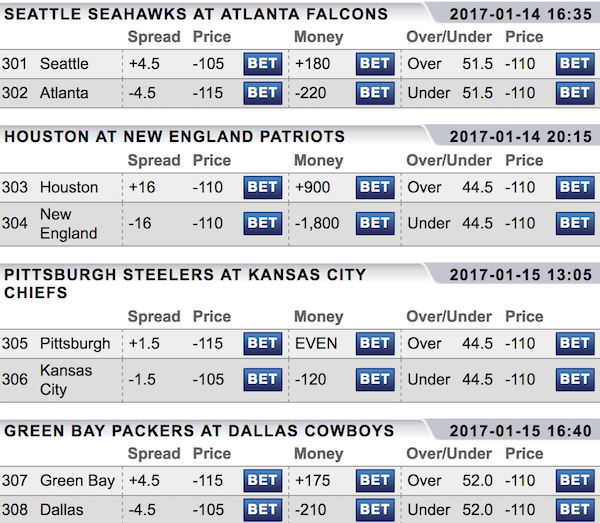 People tend to underestimate the Kansas City Chiefs when they shouldn't. Andy Reid's troops cobbled together a top-seven defense and top-13 offense during the regular season. They deserve to be taken seriously—particularly on their home field, where they are a stellar 6-2 on the year.

But the Pittsburgh Steelers are scary, even with a hobbled Ben Roethlisberger under center. Their big-play potential is still greater than that of Kansas City, and the defense, which ranks 10th in points allowed per game, is vastly underrated. Plus, Big Ben is no longer in the walking boot he was wearing following last Sunday's win.

With a 1.5-point spread, this contest is essentially a pick 'em. And while you should always be leery of betting on the home team to lose, the Steelers give us no choice: They destroyed the Miami Dolphins last week and look to be rounding into form at the best possible time. 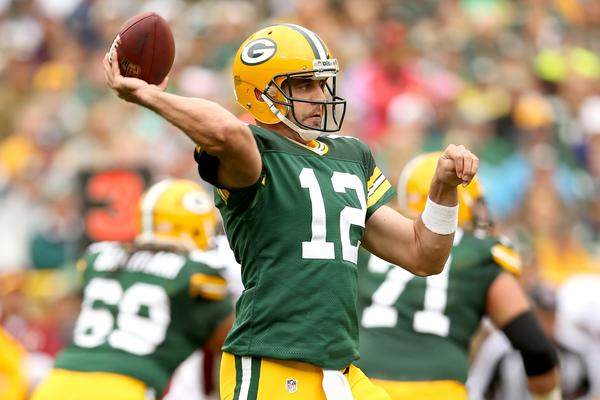 We wouldn't actually pick against a home team for the third time in four games, would we?

Look, the Dallas Cowboys had a great regular season. They won 13 games. They ranked in the top five of both points scored and points allowed per week. Rookie quarterback Dak Prescott is a strong decision-maker. Rookie running back Ezekiel is a godsend in the backfield. The offensive line is as good as ever. Dez Bryant looks like his old superstar self. Tight end Jason Witten is still chugging along. And the defense is of above-average quality.

But experience matters in the playoffs. We saw it with the New York Giants' wide receiving corps last Sunday, when they fell at the hands of the Green Bay Packers. We should expect to see some missteps from Prescott as well this week.

Sure, teams can grind out victories in spite of mistakes. But your margin for error is razor thin when going up against Aaron Rodgers, who is quarterbacking a Packers offense that appears to have found itself.