The Dallas Stars are heating up at the right time as the club is seeking a fourth straight victory on Saturday night against the visiting Florida Panthers. Meanwhile, watch for the New York Rangers to make easy work of the Colorado Avalanche on the road.

Here are a few NHL betting lines to consider, with odds courtesy of BetOnline.

The Dallas Stars will look to close out 2016 on winning note on Saturday night when they host the Florida Panthers at American Airlines Arena.

Winners of three straight games, the Stars enter Saturday’s match as -148 favorites on home ice, where the club has posted an impressive 11-5-3 record this season. The Panthers have lost four straight games — three in overtime or shootouts. They head into the Lone Star State as +134 underdogs.

The Stars have been propelled by the dynamic duo of Tyler Seguin and Jamie Benn. Seguin leads the team in goals (13), assists (24) and points (37). The superstar centre has five points in his last three games heading into action. Benn has been equally impressive, riding a three-game scoring streak, including a three-point performance on Dec. 29 against the Avalanche.

The Panthers have had the upper hand against the Stars over the last 10 games between the two clubs, winning six times over that stretch. However the Stars have won three straight games, including both contests during the 2015-16 campaign.

BetOnline has set the total goals projection at 5.5 for Saturday night. With the Stars finally click offensively, expect the goals to come in bunches against a vulnerable Panthers defense. 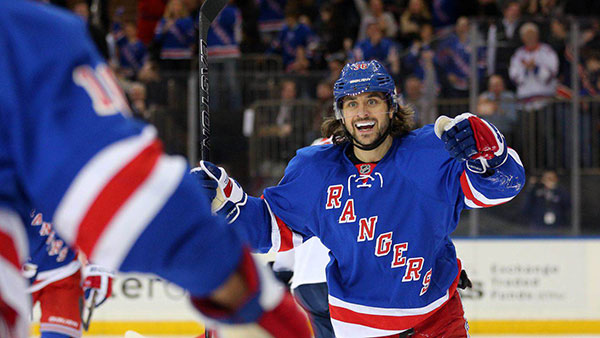 An average month of December had some hockey experts questioning whether the Rangers were actually the real deal. The club has silenced their critics by winning five of their last seven games heading into a road game on Saturday against the lowly Colorado Avalanche.

The Rangers — 7-3-0 in their last 10 games — enter their New Year’s Eve clash as the -175 favorites. Alain Vigneault’s club currently sits third in the ultra-competitive Metropolitan Division as they continue to chase the Pittsburgh Penguins and the red-hot Columbus Blue Jackets. The Avalanche are just 2-8-0 in their last 10 games and explains why they are the +158 underdogs at the Pepsi Center, where they’ve posted a losing record of 4-12-1 this season.

It may be a long night for the Avs, who are the lowest scoring team in the NHL compared to the Rangers who share the league lead in goals for along with the defending Stanley Cup champion Penguins.

As cross-conference opponents, these two clubs don’t face off too often, however the Avs hold the edge head-to-head winning six of the last 10 meetings dating back to the 2009-10 season.

If you’re considering an over/under wager, BetOnline set the total goals projection at 5.5. Watch the for the Rangers to open things up and run away with this game in what should turn into a convincing victory.

The Edmonton Oilers may still be in rebuilding mode, but having Connor McDavid on the roster has sped up the process this season. McDavid and the Oilers, who sit second in the pacific division, will play host to the Vancouver Canucks Saturday night at Rogers Place.

Winners of four of their last five games, the Oilers enter Saturday’s home match as -230 favorites. The Canucks, who are coming off back-to-back victories, head to Edmonton as +205 underdogs.

McDavid is still tied for the league lead in points with Pittsburgh Penguins star Sidney Crosby, but the Oilers’ captain has just one goal in the last eight games. The good thing for the Oilers is if McDavid isn’t scoring, others are picking up the slack. In 37 games, the club has netted 106 total goals, which ranks seventh in the NHL.

The Canucks have won six of the last 10 meetings against the Oilers, but expect the tables to turn on Saturday night.

Considering a point spread wager? BetOnline is offering an intriguing -1.5 line for the Oilers, who should be able to cover against a struggling Canucks team.