Can the Ottawa Senators recover from a tough opening loss or will the Boston Bruins head back to Beantown up two games in the series? Its one of several Game 2 matches to keep an eye on heading into action on Saturday night.

If you’re searching to put together the perfect parlay bet, look no further as we provide our predictions for matchups on Saturday night. Odds are courtesy of Bovada.

The Senators dropped the opening match of this series and will attempt square things up against the Bruins on Saturday at the Canadian Tire Centre.

Many sportsbooks still have Boston as the favorites, however Bovada is calling this a pick ’em game, with both the Bruins and Senators heading into the crucial matchup at -115.

The Senators were right where they wanted to be in Game 1 up until the 17:27 mark of the third when Bruins’ star forward Brad Marchand snapped the tie and gave Boston the victory.

Betting on the total goals for Saturday’s contest? Bovada has a projection of 5, however you can expect another low-scoring affair when these defensive-minded teams face off in Game 2 on Saturday. This time, it’ll be the Sens that come out on top. 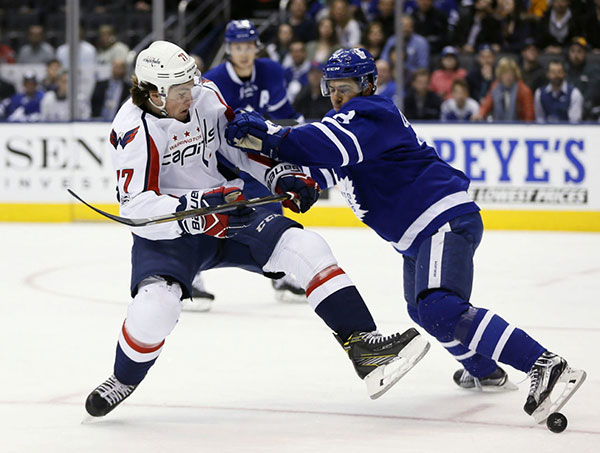 Held to just one shot on goal, the Great 8 will try to carry his team to victory when the Capitals host the Maple Leafs in Game 2 on Saturday night.

The Capitals enter action as the -250 favorites on home ice at the Verizon Center, where they have lost just seven games this season. That’s not good news for the underdog Leafs, who let a 2-0 lead slip away in the opener. Toronto heads to D.C. as the +200 dark horse.

What was evident in the first game of this series is that it’s not going to be a blowout as many expected. However in 10 games against the Caps, the Leafs have only won twice.

Expect things to open up on Saturday so consider taking the over on Bovada’s line of 5 or more goals with the Leafs earning the Game 2 upset victory.

The Hawks picked a bad time to go on a mini-losing streak. After dropping the last four games of the regular season, Chicago opened the playoffs with a defeat.

The Hawks will look to regroup on Saturday and avoid heading to the Music City down two games when they take on the Preds at the United Center.

Entering action as -175 favorites, the Blackhawks were held without a goal in the opening match — a rare occurrence considering the club ranked among the top scoring teams in the NHL. The Predators — +145 underdogs — sat on a 1-0 lead throughout the game.

There were only three penalty calls in the game, two of which went to the Predators. However the Hawks could not convert on the man advantage.

The total goals projection is 5, but don’t let the result from Game 1 scare you away from taking the over with the Blackhawks responding to win on Saturday.

The Ducks will look to continue their dominance over the Flames at the Honda Center on Saturday when the Pacific Division foes clash for Game 2 of their Western Conference quarter-final.

The Flames have been held without a win at the Honda Center since 2006. The Ducks, who edged the Flames in the series opener, enter action on Saturday as -160 favorites. The Flames, who are +130 underdogs, head to California not only looking to put this skid behind them but to avoid going back to Calgary down two games in the best-of-seven series.

The Flames held their own in the opener but were torched in the faceoff circle, winning just 37.2 percent of the draws compared to Anaheim’s 62.8. If Calgary stands any chance in this series, the club must improve on faceoffs.

Bovada has a total goals projection of 5, but don’t anticipate a high-scoring matchup as the Ducks will surely go up 2-0.