The wisest wagers on opening night of the Stanley Cup playoffs, with odds provided by BetOnline.ag:

On the surface, it appears that finishing first in the Atlantic Division was a form of punishment for the Canadiens, who face a Rangers team that finished one point behind them, as opposed to a weaker divisional foe such as the Boston Bruins or Ottawa Senators. But to know this matchup is to know the happiness that the Habs must be feeling.

The Canadiens swept all three games from the Rangers this season and outscored the Blueshirts 11-7, while also holding the edge in most key analytics from the head-to-head showdowns. Rangers goalie Henrik Lundqvist is 4-9-2 with a dismal .877 save percentage and 3.87 goals-against average at the Bell Centre.

The Senators took all four games from the Bruins this season. This series is a battle of differing philosophies. The Senators like to sit back and play a 1-3-1 trap, counting on their defense and goaltending to keep things tight and low scoring. 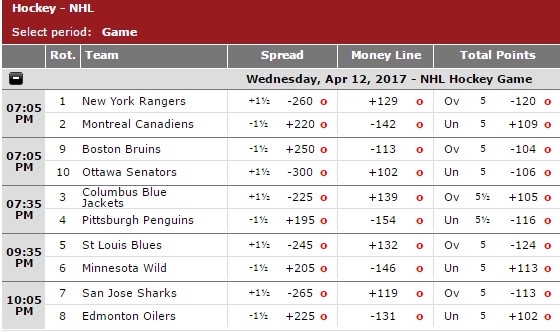 Boston has opened up more under coach Bruce Cassidy and will look to run and gun more than Ottawa. The Bruins owned 54.72 five-on-five Corsi For percentage, second-best in the NHL. The Senators (48.44) ranked 23rd in the same category, the worst of any playoff team.

Riddled by injury and with even goaltender Matt Murray, their 2016 Stanley Cup hero, an apparent uncertain starter, the Penguins might seem to be ripe for the picking. But the Blue Jackets are stumbling, going 1-6-1 in their last eight games and winning just three of their last 11 games. Columbus allowed three or more goals in five of their last six games.

The Penguins are without defenseman Kris Letang (back injury) for the season but welcomed back defenseman Trevor Daley from a 20-game injury absence. Penguins forwards Sidney Crosby and Evgeni Malkin combined for 77 goals.

The hottest team in the NHL since Feb. 1, the Blues were 22-8-2 in that span and produced a goal differential of +33. St. Louis won three of five from Minnesota this season. Blues goalie Jake Allen went 10-2-2 in his last 14 decisions but owns a career 3-5 playoff mark and and postseason save percentage of .902.

The Wild produced a 19-point increase over their 2015-16 totals, including a 12-game winning streak, and enter the playoffs riding a four-game winning streak. Wild goalie Devan Dubnyk turned in a dismal .889 save percentage in March, a month that saw the club squander the Central Division title by winning just four of 16 games. 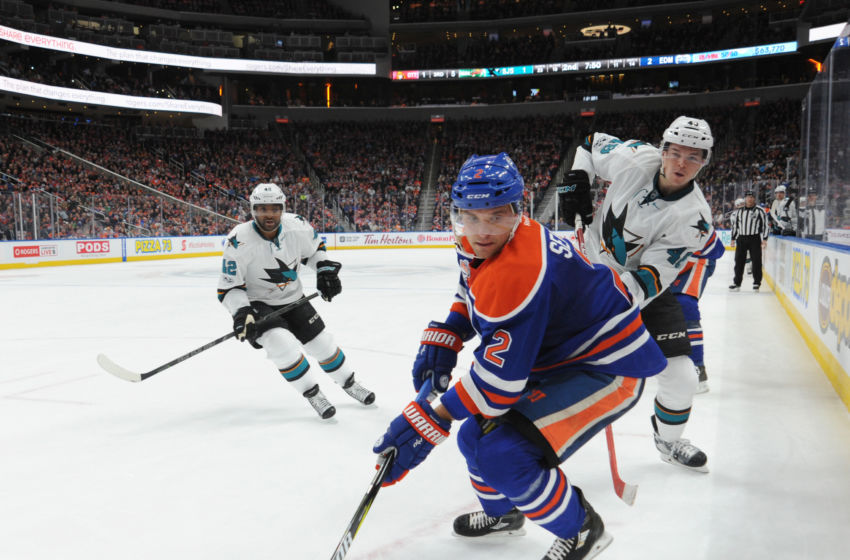 Jumping from 29th in the NHL into a playoff spot, the Oilers showed an NHL-best 33-point turnaround. Connor McDavid captured the Art Ross Trophy, leading the NHL with 70 assists and 100 points – as well as with 30 multi-point performances - and will get his first taste of postseason play in his second NHL season.

The defending Western Conference champion Sharks simply looked like they'd run out of gas over the last month of the season, going 4-9 in their last 13 games.